“Millennials aren’t buying in big cities. Over the past decade, the homeownership rate among young adults fell in all but one of America’s 25 largest cities. In Boston, it remained unchanged at 16%. In several cities, including Portland, Denver and San Jose, it fell by more than 10%.
Affordability is key. In eight of the top ten cities where the homeownership rate among young adults has increased the most in the past decade, the median home value is lower than the national median.” some key findings as reported by SmartAsset article. 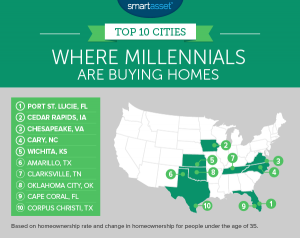